How is it you can be totally infatuated one day, and then the next day, see the fatal flaws in the object of your affection?

If that’s you, embrace your superpower gift. Don’t fall in love with your own writing. Love it, and then leave it. How else can you look at it with a critical eye? How else can you rip out those seemingly perfect phrases or paragraphs, or even characters, scenes and whole chapters? 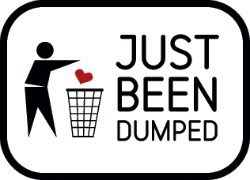 Write like a bad boyfriend—the love ’em and leave ’em kind. Because what looks great one day, sometimes has to be highlighted and deleted the next.

“But you worked so hard on that scene,” whines one side of me. “See how catchy that phrase is? You found the perfect adjective there. That character is hilarious.”

Then my bad boyfriend side kicks in. “Forget it. It’s just not going to work. And by the way,” he adds with a sneer, “the problem is you, not me.”

Sometimes I don’t want to hear that bad boyfriend. That’s why it’s good to have good writer friends or a helpful instructor—someone who can let you down easy. All writers need that someone who can say, “Yes, it’s time to break up with your clever words, or showy sentences or pointless chapters.”

Breaking up is hard to do, but it has to be done. How else can you leave yourself open to something better?

Sigh … Try not to write in an accent or dialect, or at least not the entire story. The last thing you want to do is frustrate or exhaust readers who are trying to figure out what the heck your character is trying to say. Misspellings, made-up spellings—Yikes. 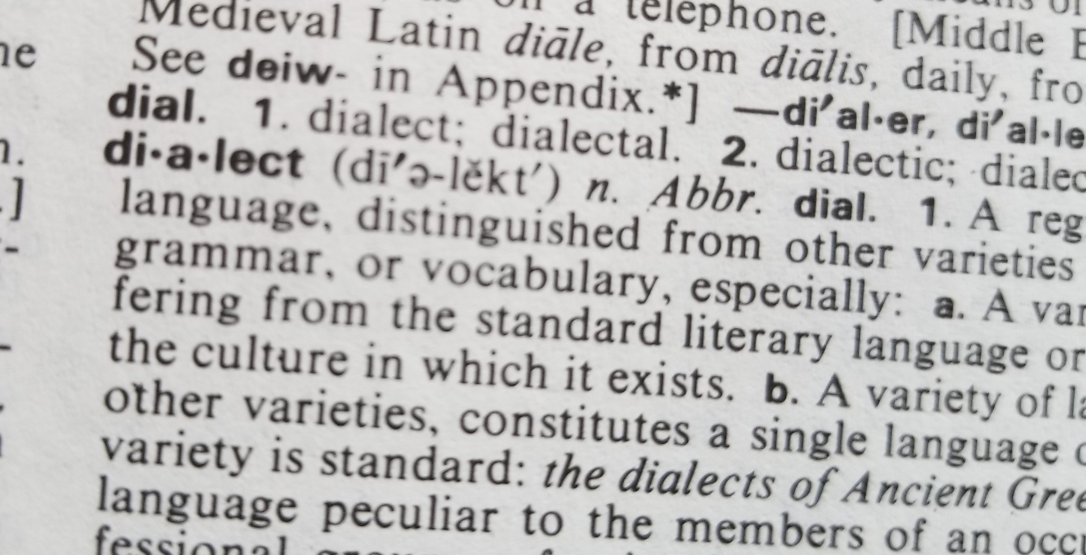 You can do a tad bit, though, to give readers a taste. Better yet, write in the grammar a character might use, or use slang and colloquialisms familiar to a region: He don’t know nothin’, She ain’t got no sense, He whooped him but good, I recken, I be goin’ now, I was gobsmacked.

Describe how the words sound:

There’s great information out there on this topic. Do your homework. Study authors who have pulled it off.

Apostrophes instead of letters

Here’s an example of what apostrophes should look like when using them in place of letters:

I’m talkin’ ’bout you, Larry. You are a stinkin’, rottin’, low-down skunk.

Is your character confused? Uneasy? Searching for the right word? Distracted? Drifting into thought?

You can show that emotion by using the ellipsis in your character’s speech:

Or interrupts herself with a strong point:

Or maybe your character’s dialogue is interrupted by her own action or emotion:

Or interrupted by another character: 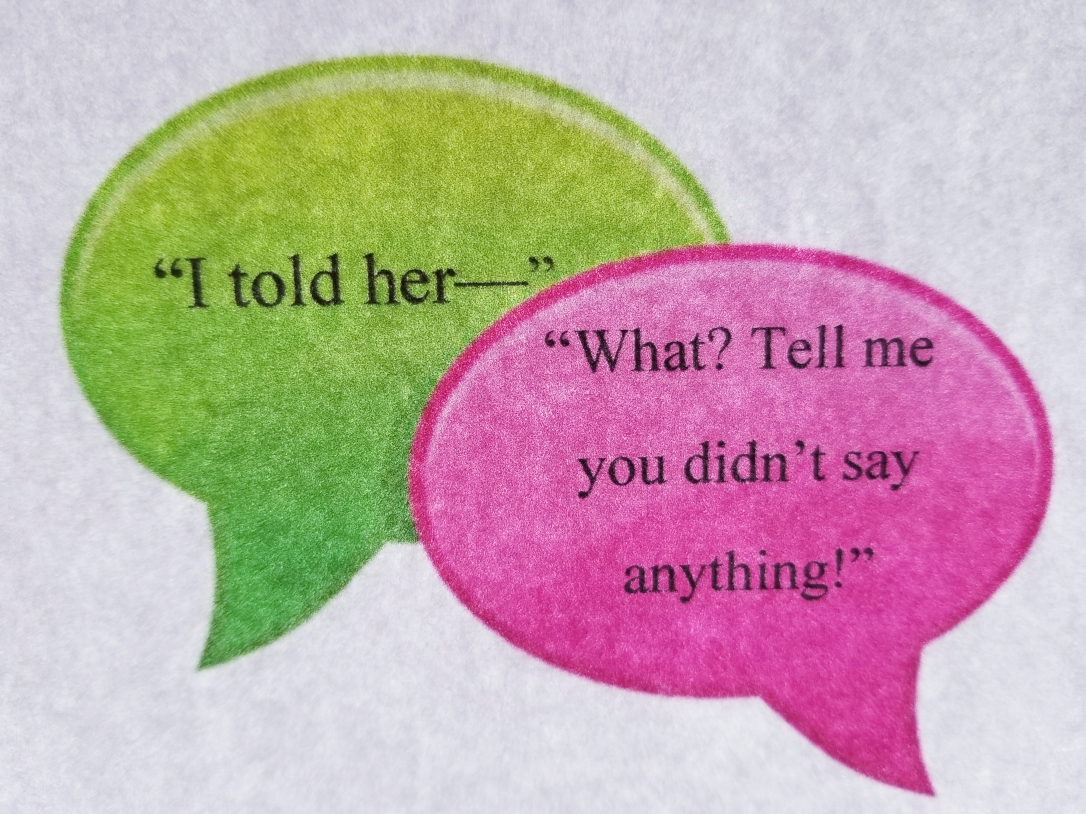 “You never think, do you? Not about me.”

You know your writing goals, but what’s your plan to get there?

A 55-year-old woman spoke at her GED/High School Equivalency Diploma graduation ceremony. She shared her struggle to get that diploma and the obstacles she faced. It took years, but she reached her goal because she never gave up.

“Remember, if the plan doesn’t work, change the plan but never the goal,” she said. Sage advice for all of us.

As many of us look back on last year’s writing resolutions, it’s easier to focus on the failures and not the accomplishments. But even if your goals weren’t accomplished, the past year brought you closer to them. Every rejection means you’re one step closer to acceptance. Every failed plot means you’re closer to finding the one that works. At the very least, you know now what doesn’t work. 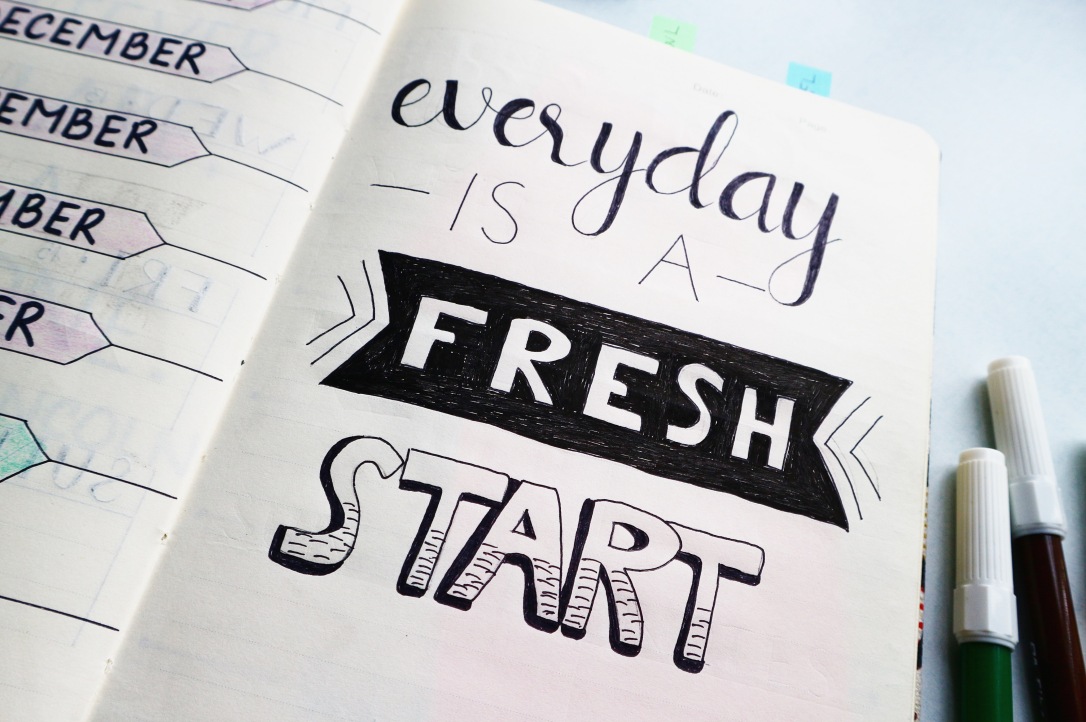 So, where do you go from here? Be specific in setting out a plan. Make appointments for specific tasks as in everyday writing, seminars, workshops. Set deadlines for specific projects as in submissions, research, queries.

“Write more” isn’t specific. When? Where? For how long? With whom? Answer those “write more” questions. Your calendar should reflect your focused plan of attack.

Everyone wants to win. But winners have a strategy. They have a plan.

If you were to page through my manuscripts, you’d see it—the em dash. I love that thing. If it were a person, I imagine it as an adoring fan gazing at me with rapt attention—unlike my family members. It’s always at the ready to make sure everyone is listening to the very important thing I’m about to say next.

It looks like a harmless short line, but in a sentence, it pokes the reader in the ribs and says, “Hey, you, listen up.” The em dash can be used to amplify or explain as if it were a little megaphone in a sentence.

Examples of em dash for emphasis:

Maybe the em dash appeals to my inner preacher … or nag. Maybe I like it because I’m never sure anyone is listening. Whatever the reason, I like the thought of poking someone with punctuation to say, “Pay attention” or “Check this out” or “Just so you understand” or “Here’s the punchline.”

We want to protect those we love. It’s human nature. But it shouldn’t be a writer’s nature—not with our characters. Don’t shield your protagonist in heavy armor. Life sucks sometimes, but it should especially suck for your characters. It’s called drama, action, adventure.

Do you want the reader to feel your character is in danger? How can that happen if no one is able to get across that mote you built around the fortress? Evil is threatening your protagonist, you write. But how invested can the reader be if that evil can never get close enough for her to feel his hot breath against her cheek, or hear his raspy whisper in her ear, or grapple with evil’s grip around her throat?

You can rescue her, of course, in the nick of time. But make it something worth rescuing.

Make your characters real. Stuff some meaty conflict inside them. Yes, good people get tempted—even tempted to surrender to the dark side. Let them go. To err is human. To mess up big time is great reading.

Even in children’s books, any excruciating experiences—humiliation, rejection, pain, loss—make the victory at the end much more satisfying.

Long before those adult coloring books became a fad, I loved to color. Whenever my kids pulled out the crayons, I found myself doodling or filling in a page even after they moved on to the Legos.

There’s something soothing and satisfying in the rainbow look and waxy smell of a newly opened box of pristine crayons. Highlighters get to me, too, with their soft neon colors gliding across a smooth page.

I’m not an artist. I do not paint. I wish I could, so maybe that’s why I welcomed the suggestion to highlight all the senses I could find in my novel. Will the reader taste, touch, see, smell, hear my story? The highlighters are lined up—pink, orange, yellow, green, and blue—each with an assigned sense. I want my pages to pop with the same inviting rainbow as a box of crayons or a package of highlighters.

Could there be too much of a good thing? I think so. Descriptions draw the reader into the story. But they can stop the action and, well, get kind of boring if they go on too long. I can hear the reader now: “Yes, yes, yes—the trees, the bees, the wind—blah, blah, blah. What’s happening with what’s-her-face and what’s-his-name? Get on with it, already.”

So, a little pink here, a little blue and yellow there, it goes a long way. By appealing to a reader’s senses, hopefully, she’ll get that same pleasure that comes with opening a new box of crayons.

“Hi. My name is Mary R, and I’m an exclamation point-aholic.”

“Hi, Mary,” droned the group of writers. A few disheveled members fidgeted with their phones. Others stared at me with exhausted, burnt-out eyes. The survivors, further along the road to recovery, nodded and smiled.

“It started out innocently enough,” I told them. “I was writing a children’s story, after all.”

“I didn’t even think twice about it. I typed ‘Hey,’ and before that second quotation mark even had a chance—shift, tap—I had hit the exclamation point. That punctuation mark pulsed on the screen, and an electric thrill zinged through me.

“Two sentences later I typed another. Don’t get me wrong. I did think about it before I … Okay, who am I kidding? It popped up on my screen as if it had a life of its own. The energy, the excitement radiated from that slash-dot. My face flushed, my heartbeat quickened. I gave myself over to the ecstasy of exclamation! I was hooked.

“Before I knew it, I had a page full of exclamation points jumping up and down, dancing, flipping, and doing other unspeakable things—in a children’s story, mind you. Some of them clumped in an angry mob—two, three, yes, four! I admit it: four exclamation points in a row!! Adrenaline surged through my veins. I could hear the excitement in my character’s voice. I could feel his energy. He was alive, I tell you, ALIVE!!!

One writer shook her head at me. Most held their heads in their hands. I saw a couple wipe away tears. “We’re here for you, Mary,” said one.

“I’m here because of the children,” I told them. “I had nightmares of children jumping on their beds and bouncing off their walls. And it wasn’t because of the plot or the characters or the conflict. It wasn’t because of well-crafted writing. It was because I let loose a gusher of exclamation points that hit them like a frozen slushie tidal wave, like a stampeding sugar rush. In the corner, an editor writhed in pain as if battling an ice cream brain freeze. I did that to them.”

“It was only a nightmare,” whispered someone.

So, how’s it going? National Novel Writing Month, that is. This would be the almost halfway point in your quest to hammer out 50,000 words on your novel. If you’re like many writers, that bright, shiny goal might be looking duller by the day.

Go ahead and curse NaNo if you wish. I will not judge you. But don’t stop writing.

I always fancied myself as the tortoise—not the hare—in the writing race. My eyes are fixed on the goal. How fast I get there is not my main concern. Getting there is.

So, if you ruminate over a particular word, or rewrite a scene you labored over last week, or feel compelled to pause to research a detail, that’s okay. The clock may be running out on that NaNo-word-count-thingy, but don’t despair. It’s all about writing anyway.

Whether or not you get those 50,000 words, you are going to wake up December 1st and still write … right? So press on. Write.

Fiction writers: Put your hands up and move away from those single quotation marks.

Sometimes I see writers use single quotation marks around a word to show irony, to show the word is a nickname, or to show it’s a weird or unfamiliar term. By American punctuation standards, that’s downright unpatriotic.

Use double quotation marks instead:

When to use single quotation marks:

For fiction writing, that’s pretty much all you need to know about single quotation marks. Used correctly, you might see fewer of them on your pages.

For fresh eyes on your manuscript, visit I Spy Edits.