Like is a word that pops up in conversation so often, even when it’s wrong, it sounds so right. Here we go anyway.

(As is a conjunction used to combine two independent clauses.)

(Use such as when giving examples.)

(In this sentence, kiwi is an example of the fruit you’d like to find. Kiwi is on your shopping list!)

(In this sentence, you don’t want to find kiwi. You already have kiwi at home, but you like it so much, you want to find fruit similar to kiwi.)

Honestly? These rules may be important in formal writing, but when writing a novel? Your characters talk as they do. Or would they say like they do? They shouldn’t, but … ain’t nothin’ you can do about it.

Use the word fewer if you can count something:

Use less if you cannot count something:

However, nothing is ever that simple. So …

Even though you can count up all the money, coins and bills, in my purse, the $5 total is considered a bulk amount in this sentence:

When indicating a span of time rather than the individual number of years or individual minutes, use less:

Confucius: The man who moves a mountain begins by carrying away small stones.

That writing mountain: finish the first draft, rewrite, query, just get a freaking idea for pity’s sake! Whatever your mountain is, find a small stone to carry away. A small one, any one, to make you feel you’re moving your mountain.

Many times, we see and hear the authors who have moved the mountain, and we forget that once upon a time, they were wanna-be-authors facing the mountain. What stones did they have to carry to accomplish their goal? The answer: All of them.

So, stop looking at the mountain, and focus on a stone: “I have no idea what to write, but I’m going to write anything that pops to mind for 30 minutes.” “Today, I’m going to research and find three agents open for queries in my genre.” “I’m going to work on that first draft, and it’s going to be a colossal heap of crap. But that means it’s a few stones closer to moving the mountain.”

Carrying stones can sometimes be slow and painful work—by yourself. “A little help, here?” Help is everywhere. Books, blogs, articles, workshops, mentors, social media groups, writing partners: They’re out there ready to help. Be brave. Pick up a stone and seek help.

And those accomplished authors? They’ll tell you there’s always another mountain after you finish conquering the first.

My husband gave me a beautiful journal for my birthday. I stared at its gilded cover and turned its pristine pages. “What could I possibly write that would be worthy of this elegant vessel?”

Then I knew. I would mark it up with messy, inky missives with scribbled-out words and splotches. I would paste pictures and memes only I might care about. I want its pages dog-eared. I want it to look used up.

It would be my sounding board, my ear to whisper in, my writer’s BFF.

But I wouldn’t bother writing Dear Diary. It knows what it is.

What it is, is cathartic, therapeutic, motivating and inspiring—to me. It’s about my unique writing journey, filled with my cries and commentary, my personal tips and pep talks, customized for me.

Why every writer should have a writer’s Dear Diary:

There’s something so inviting about a blank sheet of paper. It’s just begging you to make your mark.

Writing in my writer’s journal is not one more thing on my writer’s to-do list. It isn’t a task, an obligation, or a discipline. It’s like that text you send to a good friend when you want to share some news or vent or just to talk. And who doesn’t need a friend like that?

Unfortunately, too often, you see decades written with misplaced apostrophes.

You might see it incorrectly spelled on signs, billboards, in blogs, and even the news ticker on cable news. They made an oops.

The first step to recovery is to admit you have a problem. So:

I admit have a problem with an app.  Not just any app, a game app on my phone that takes up an inordinate amount of my time.

The app advertises itself as a tool to exercise your brain and stave off dementia. It involves words, so … sounds beneficial, right? Except I’ve become so good at it, I can do it rather mindlessly while watching TV. My brain could atrophy and I could slide into dementia today, but I’m quite certain I would still be rather adept at it. I’d forget what a spoon is, but my fingers would instinctively and proficiently play that darn game.

I don’t even want to think about how much time I spend on it—mindlessly earning game coins that I can’t buy anything useful with—except other game coins.

But I have had an epiphany. Every time I reach for my phone to play that game, I am going to think of the word “write.” What if that time I spent playing the game was transformed into writing time?

I know the time of day when I typically reach for that game, so I can easily imagine doing something more useful: writing, thinking about writing, watching a webinar on writing, reading about writing, honing my writing craft, analyzing books in the genre I am writing in.

When writing isn’t your main job, and it’s not translating into a paycheck at the moment, it’s easy not to prioritize it. There are other things to do. But honestly, some of those other things … are they really worth doing? Think about how much closer to your writing goals you’d be, if you spent more time writing or reading about improving your craft. Even if it’s just a little more time. So:

Think of a useless, veg-out type of activity that’s wasting your time. Maybe it’s that second hour on the couch watching TV. Imagine turning off the TV, and then choosing to do something very specific: I am going to set the timer and do 20 minutes of free writing on anything that pops into my head. I am going to search for submission opportunities. I’m going to pull out an old manuscript and change the POV. …

The English language can make your head spin sometimes. Or is it some times? There are a lot of words that make writers go hmmm.

Is it onto or on to? Awhile or a while? Everyday or every day? Maybe these words are no brainers to you; or you may be fooling yourself.

If you can replace maybe with the word perhaps in your sentence, then it’s one word.

Back to the word sometimes. It means now and then.

Some time means a while. You can replace some time with phrases such as a little while or a long time.

How about onto versus on to?

Use on to when on acts as an adverb, and to acts as a preposition.

Onto is a preposition meaning upon or on top of or in position of. If you can put the word up before on in the sentence and it makes sense, onto is correct.

Onto is also used to mean in a state of awareness:

Everyday or every day?

Everyday is an adjective:

Awhile or a while?

Use awhile as an adverb:

But if you add the preposition for or in, then while becomes a noun:

Then there’s a lot. That one is easy because there is no such thing as alot. It lives out there among the unicorns and leprechauns.

We could go on, but … If you see a word and you’ve got a funny feeling about it, look it up. Or you can contact me at I Spy Edits. 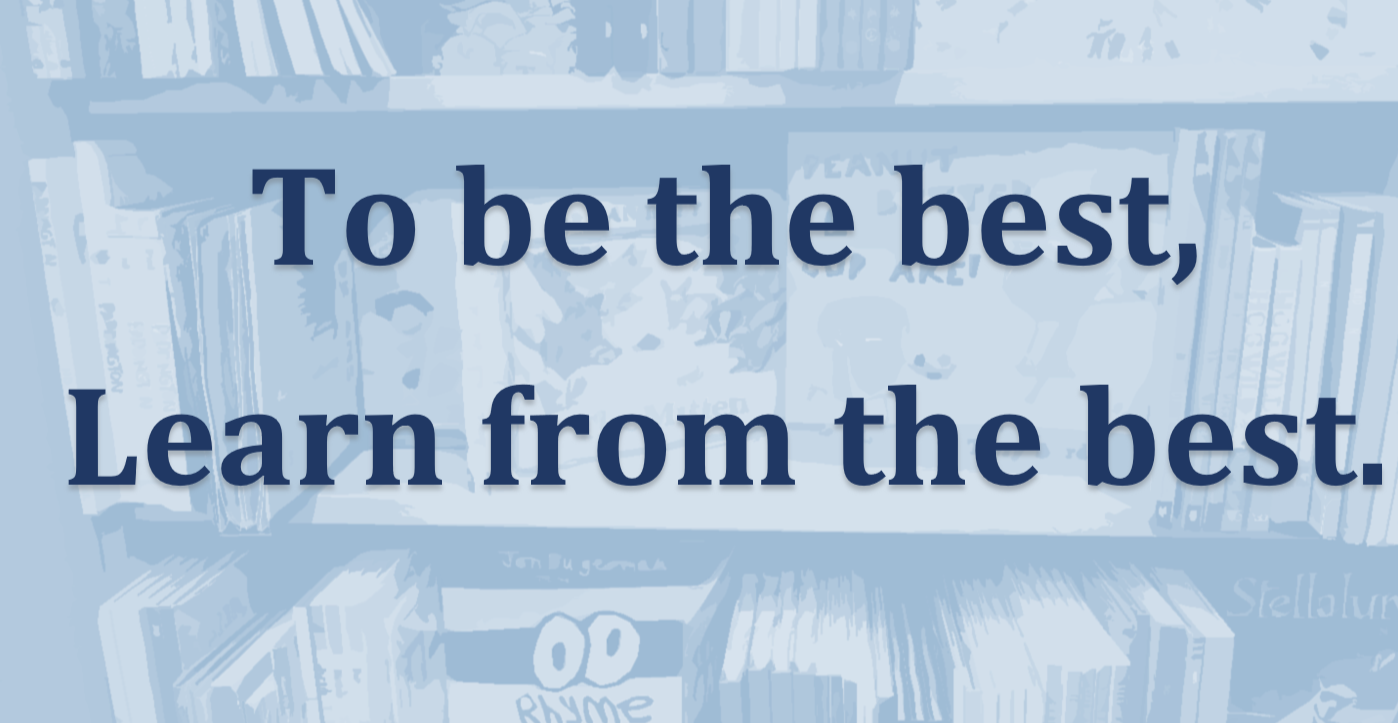 And for us writers, the best is waiting for us at the library and the bookstore.

In The Magic Words, editor Cheryl B. Klein writes, “If you want to write well, you must get good prose and story structures into your brain so they flow naturally onto the page. You can only do that through massive amounts of reading.”

Klein shares Newbery Medal-winning author Linda Sue Park’s suggestion that aspiring children’s writers need to read at least 500 books in the age range they hope to write for before they begin.

Study the books you love. Why do you love them? What is it about the writing, the plot, the characters that make you want to turn the page and keep reading?

One writing exercise is to rewrite a chapter of a book or an entire picture book to study and absorb the prose of a well-written story.

“Massive amounts of reading” may sound like a daunting task, but if we look back on our reading history, I bet most can honestly say, “Yes, I’ve already read a massive, walloping, humongous amount of books. And it was my pleasure.”

Now all we have to do is add purpose to that pleasure.

So, treat yourself, dear writer. Turn off the TV and delete that Solitaire app on your cellphone. Linger instead among the stacks of great books—a writer’s best friends and teachers.

Since I write children’s fiction, I always considered my own kids—or sometimes that random kid on the playground—my primary source of inspiration. They still are, but this green-haired troll has become a fixture next to my keyboard.

Trolls were popular when I was a kid and I had several. When I saw this tiny troll at my kids’ school book fair a number of years ago, I had to have it. He reminded me of my childhood—a time when the chasm between the kid and adult worlds seemed wider and deeper. No helicopter parenting then. If you were a kid on a bike, you were free … for hours … until the streetlights came on. When you sat down to dinner and your mom asked you what you did all day, the answer was always, “Nothing.”

Nothing, but you did everything. You explored, you navigated, got dirty, skinned your knees, made your own rules, maybe caused a little trouble or fled from it. You got lost in your own little world or in a herd of other kids. You did so much, but to recount it … to a grownup? They would think it was nothing.

But it was never nothing to a kid, and that’s what my little troll reminds me.

Another definition of muse (noun): a state of deep thought or dreamy abstraction. Dreamy abstraction. I like that. Preoccupied with thoughts—dreamy thoughts. What a nice way to think about writing. What a wonderful state of being.

So, whatever it takes to transport you to that dreamy abstraction … why not?

I’m an emotional eater. Something goes wrong in life, and the next thing I know, my head is buried in a bag of chips. I don’t even bother scooping the ice cream into the bowl. I just eat the whole thing right out of the bucket.

You, too? When things go wrong in life, do you feed your face but let your writing starve?Do you tell yourself: “I’m just not up to it now” … “How can I write a funny scene or an inspiring story when I’m feeling gloomy?” … “I’m too stressed to write”?

Whatever our mood, it shouldn’t determine whether we write or not. Writers write.

Writing can be the escape, the refuge, or even better, the cathartic release for whatever ails us. Instead of drowning our emotions with food, we should be releasing them through writing.

Admit it, writing gives you a sense of accomplishment, doesn’t it? More than that, writing can be euphoric. Writing is a happy pill. So, open wide and swallow it.

Think of writing as a sensible diet plan: A fat and happy writing life means you’re less likely to bury your head in a bucket of ice cream.